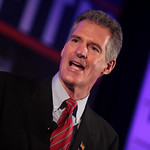 Massachusetts Sen. Elizabeth Warren is endorsing former rival Sen. Scott Brown to head the Department of Veterans Affairs in the Trump administration, should Donald Trump nominate him for the job. “If Scott Brown is the nominee for Veterans Affairs, I have no doubt that he would put his heart and soul into trying to help veterans,” Warren said in an interview with Boston’s WGBH News Wednesday. Warren’s backing comes amid some reports that former Alaska Gov. Sarah Palin is being considered, but as CBS News’ Major Garrett reports, her consideration is largely “theoretical,” and not necessary serious, according to transition officials. If he were to be appointed to the post, Brown said he would focus on lowering the suicide rate among veterans and expediting the process for treatment at VA hospitals across the country.