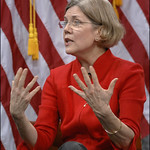 In a scathing letter to President Obama, Sen. Elizabeth Warren urged the outgoing president to immediately remove Mary Jo White as chairwoman of the Securities and Exchange Commission. Due to White’s anti-disclosure agenda and repeated failure to impose federal mandates, Sen. Warren called for White’s replacement on Friday to prevent the SEC chairwoman from causing further damage to investors and the public. The Supreme Court’s Citizens United decision in 2010 opened the floodgates allowing dark money to influence U.S. elections without disclosing the identities of the donors. As Democrats fight to repeal Citizens United and the newly drafted rider, Warren accused the SEC chair of dereliction of duty while actively supporting an utter lack of transparency.