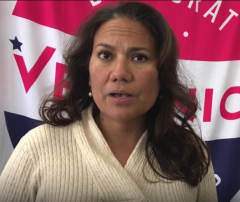 Rep. Veronica Escobar said Monday that President Donald Trump "is not welcome" in her hometown of El Paso, Texas, as the city recovers from a mass shooting that killed 21 people and wounded more than two dozen. "From my perspective, he is not welcome here. He should not come here while we are in mourning," Escobar, a Democrat whose district includes nearly all of El Paso, told MSNBC's "Morning Joe." "I would encourage the president's staff members to have him do a little self-reflection. I would encourage them to show him his own words and his actions at the rallies."