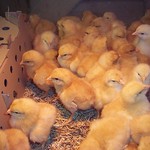 United Egg Producers, the industry group that represents 95 percent of egg producers in the country, announced Thursday that they would end the process of “culling” male chicks by 2020. Instead, they’ll use technology that determines the sex of a chicken embryo still inside an egg. Until now, the industry’s solution to deal with these millions of unwanted male chicks has been to throw them, typically still alive, into high-speed grinders similar to woodchippers or suffocate them. Egg layers are bred to be egg laying machines who can pump out hundreds of eggs each year; expected to live for approximately one year,.. On the other hand, broilers are bred to be grotesquely large, growing to a huge size within one month — when they are slaughtered. This leaves the male laying breed as the odd man out — too small to be really profitable to raise for meat and unable to lay eggs.”