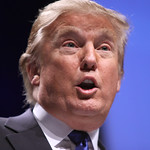 Martin Schulz, the German president of the European Parliament, is very concerned about the current state of the EU. "We're at a historical juncture: A growing number of people are declaring what has been achieved over the past decades in Europe to be wrong." Schulz also expressed his fears of a possible US President Donald Trump. "Then you will have an obviously irresponsible man sitting in a position that requires the utmost sense of responsibility," he says. "Trump is not just a problem for the EU, but for the whole world."