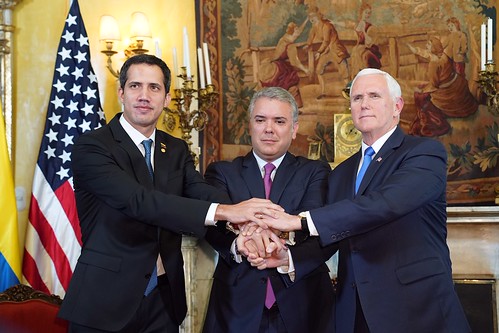 A Venezuelan official has published photos that he says are further proof of ties between the country’s self-proclaimed ‘interim president’ Juan Guaido and a drug cartel member, who allegedly helped him sneak into Colombia.

Guaido is proving to be the type of leader Trump and his henchmen can get behind. He hasn’t decapitated anyone, yet, but has embezzled $Billions of Citco monies the Trump Administration handed him, he appears to have teamed up with a drug cartel in order to “help” his would-be citizens, he has asked for a military invasion to kill innocent citizens he wants to lead. Not even in power and he has done more harm to the country than Maduro who the people of Venezuela want as their leader as indicated in election after election.