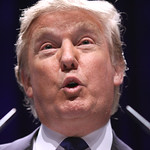 Donald Trump
(Image by Gage Skidmore)   Details   DMCA
The Trump administration will reintroduce sanctions on Iran at a minute after midnight Monday ET, a consequence of the president's decision to withdraw from the landmark 2015 nuclear deal. "What is happening today is part of a coordinated campaign of pressure on Tehran that President Trump put in place since day one of his administration," according to a senior administration official. "We are looking at the region from Yemen to Syria and the regime using the resources they got from the [nuclear deal] to spread human misery across the region instead of spending on its people at home," they added. What will these measures involve, how do they affect America and Tehran, and what could be coming next?
Read the rest of the story HERE: