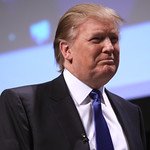 Donald Trump
(Image by Gage Skidmore)   Details   DMCA
Donald Trump has been slapped with a lawsuit by US states after he signed an executive order scrapping a key component of Obamacare. Trump said he wanted to end subsidies to insurers that help millions of low-income people pay medical expenses because “I don’t want to make the insurance companies rich.” Democratic attorneys general from the 18 states as well as Washington, DC, filed a lawsuit in federal court in California later on Friday. The states include: California, Connecticut, Delaware, Kentucky, Illinois, Iowa, Maryland, Massachusetts, Minnesota, New Mexico, New York, North Carolina, Oregon, Pennsylvania, Rhode Island, Vermont, Virginia and Washington state.
Read the rest of the story HERE: