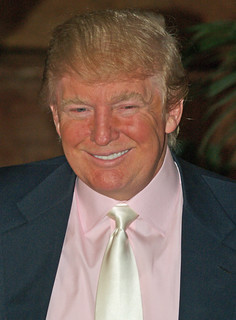 Donald Trump
(Image by david_shankbone)   Details   DMCA
Donald Trump is floating a new nickname for Sen. Bernie Sanders. In a series of tweets Wednesday morning, the presumptive Republican presidential nominee mocked Hillary Clinton, the Democratic presidential frontrunner, for losing the West Virginia primary on Tuesday to the "crazy" Sanders. "Big wins in West Virginia and Nebraska. Get ready for November — Crooked Hillary, who is looking very bad against Crazy Bernie, will lose!" Trump wrote, using his preferred moniker for Clinton. He continued in a second tweet: "I don't want to hit Crazy Bernie Sanders too hard yet because I love watching what he is doing to Crooked Hillary. His time will come!"
Read the rest of the story HERE: