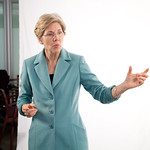 Donald Trump could face impeachment if he fails to declare conflicts of interest between his new presidential role and his business empire under a new bill introduced by Democratic Senator Elizabeth Warren. Senator Warren’s bill seeks to make any conflict of interest by Mr Trump an impeachable offence. Set to be introduced in January by Ms Warren and a group of Democratic senators, the bill will invoke the little-known Emoluments Clause of the constitution, which forbids the President from accepting gifts or favours from foreign actors. Under Article I, Section 9 of the constitution, the President is forbidden from “accept[ing] any present, emolument, office, or title, of any kind whatever, from any king, prince, or foreign state.”