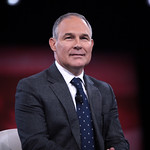 Trump has selected Scott Pruitt, the Oklahoma attorney general and a close ally of the fossil fuel industry, to run the Environmental Protection Agency, signaling Trump’s determination to dismantle President Obama’s efforts to counter climate change. Pruitt, a Republican, has been a key architect of the legal battle against Obama’s climate change policies. Trump has criticized the established science of human-caused global warming as a hoax, vowed to “cancel” the Paris accord committing nearly every nation to taking action to fight climate change, and attacked Obama’s signature global warming policy, the Clean Power Plan, as a “war on coal.”