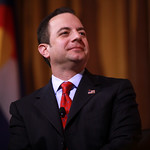 Reince Priebus
(Image by Gage Skidmore)   Details   DMCA
Donald Trump has named Reince Priebus, chairman of the Republican National Committee, as his White House chief of staff, NBC News has learned. The Republican, who is serving his third term with the RNC, was reported to be at the top of Trump's shortlist for the key White House position. That list also reportedly included Steve Bannon, Trump's controversial campaign CEO whose website, Breitbart News, has espoused anti-Semitic and nationalist views.
Read the rest of the story HERE: