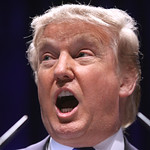 President-elect Donald Trump told The New York Times Tuesday that laws around conflicts of interest don’t apply to him, and he can simply keep running his businesses from the White House. “In theory I could run my business perfectly and then run the country perfectly,” Trump said, according to tweets from New York Times reporters interviewing the president-elect Tuesday. “There’s never been a case like this.” He is technically correct on both counts. Federal conflict of interest laws do not apply to the president of the United States, and the obvious conflicts of interest created from his ownership of a global real estate empire are unprecedented in the nation’s history.