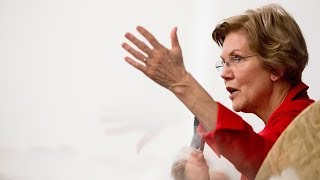 A dozens Dems are  thinking seriously about entering the primary; "it will take someone resolute, resilient, and well organized to prevail -- the winner will have to be someone who doesn’t shy away from confrontation," i.e. "At a 2016 hearing of the Banking Committee, on which Warren sits, she told the chief executive of  Wells Fargo that he should resign immediately and “give back the money you took while the scam was going on.” Some of  Warren’s critics say she is an old-style socialist, but that's not true. Rather than having the government take over  s he wants to use legislation and regulation to root out corporate abuses, correct glaring market failures, -- rebalance the power relationships between capital & labor, and big businesses & small businesses, saying: “I believe in markets, but markets work only when everyone gets a fair opportunity to compete.”