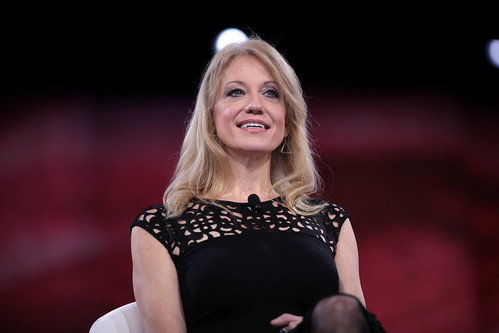 Kellyanne Conway
(Image by Gage Skidmore)   Details   DMCA
It's unclear what exactly Donald Trump wants to do when it comes to the 11 million immigrants illegally living in the United States. On Sunday morning, his newly installed campaign manager, Kellyanne Conway, was asked during an interview on CNN's "State of the Union" whether Trump still wants "a deportation force" removing the 11 million or so undocumented immigrants. "To be determined," said Conway, who in the past has supported creating a pathway to citizenship for the millions of immigrants illegally living in the United States. Hillary Clinton's campaign responded to Conway's comments by listing comments Trump has made in the past year firmly calling for mass deportations and comparing his plan to "Operation Wetback," deportations carried out during the 1950s under President Dwight Eisenhower.
Read the rest of the story HERE: