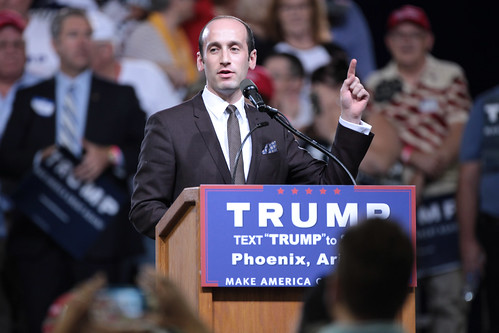 Stephen Miller
(Image by Gage Skidmore)   Details   DMCA
This article discusses questions that we should all be asking. Who is in charge in the White House? What domestic and foreign policies are going to be followed? We have seen the performance of 31 year-old Stephen Miller here: click. His performance was way out of line with what Trump has told us about his concept of his powers and his role in government. Yet Trump praised it on Twitter and Bannon (another strange factor in the White House) also praised it.

So...what is Miller’s position and why does a 70 year old billionaire need a 31 year old right wing ideologue as an advisor (or whatever he is called)?  Read more: