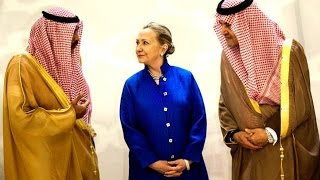 Clinton Donors Got Weapons Deals From Hillary
(Image by Secular Talk, Channel: Secular Talk)   Details   DMCA
A news report by the Jordanian Petra News Agency suggested that Saudi Arabia has paid more than 20 percent of the cost of Hillary Clinton’s presidential campaign, quoting Saudi Deputy Crown Prince Mohammed bin Salman; however the latest statement of the agency claims its website was hacked when this story appeared. The Clinton Foundation, which is chaired by both Hillary and her husband Bill Clinton, disclosed in 2008 that it had accepted up to US$25 million from the Saudi Kingdom in the same year. Other foreign governments who have reportedly donated money to the Clintons include Norway, Kuwait, Qatar, Brunei, Oman, Italy and Jamaica, which together donated around US$20 million.
Read the rest of the story HERE: