The facile and indiscriminate use of the term fascism has led to a widespread misunderstanding and misuse of its meaning. Asked to define fascism, most people would respond in terms such as dictatorship, anti-Semitism, mass hysteria, efficient propaganda machine, mesmerizing oratory of a psychopathic leader, and the like.

Such a pervasive misconception of the meaning of the term fascism is not altogether fortuitous. It is largely because of a longstanding utilitarian misrepresentation of the term. Fascism is deliberately obfuscated in order to sanitize capitalism. Ideologues, theorists and opinion-makers of capitalism have systematically shifted the systemic sins of fascism from market/capitalist failures to individual or personal failures. 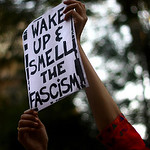