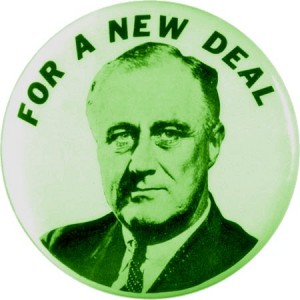 The Green New Deal takes inspiration from FDR's New Deal
(Image by ecosocialismcanada.blogspot.com)   Details   DMCA
If Brexit demonstrates that leaving the EU is not the walk in the park that Eurosceptics promised, Emmanuel Macron’s current predicament proves that blind European loyalism is, similarly, untenable. The reason is that the EU’s architecture is equally difficult to deconstruct, sustain and reform. While Britain’s political class is, rightly, in the spotlight for having made a mess of Brexit, the EU’s establishment is in a similar bind over its colossal failure to civilise the eurozone – with the rise of the xenophobic right the hideous result.
Read the rest of the story HERE: