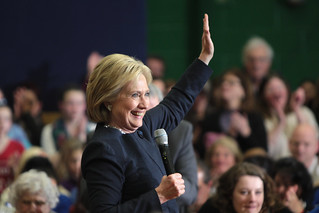 Hillary Clinton
(Image by Gage Skidmore)   Details   DMCA
In what must be described as a massive conflict of interest, Hillary Clinton has amassed nearly $75,000 in campaign donations from individuals listing their place of employment as “Department of Justice.” Considering Clinton is the subject of a sweeping investigation by the FBI — for which the DoJ will determine whether or not charges will be levied — such donations seem at least somewhat dissonant. Hillary’s donations from the Department of Justice completely swamp those of the other candidates, in fact, as Sanders’ total from 51 donors was just $8,900 and Trump garnered an inconsequential $381.
Read the rest of the story HERE: