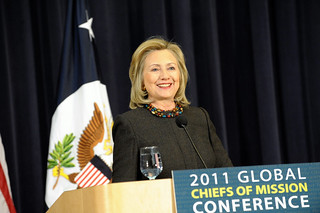 Secretary Clinton Delivers Remarks at First-Ever Global Chiefs of Mission Conference
(Image by U.S. Department of State)   Details   DMCA
In what must be described as a massive conflict of interest, Hillary Clinton has amassed nearly $75,000 in campaign donations from individuals listing their place of employment as “Department of Justice.” Considering Clinton is the subject of a sweeping investigation by the FBI — for which the DoJ will determine whether or not charges will be levied — such donations seem at least somewhat dissonant.
“I’m not surprised in the least to see more evidence that shows the politicization of the Justice Department,” said watchdog group, Citizens United, president David Bossie, in a statement to the Free Beacon. “How can Democrat political appointees fairly investigate someone who is about to become their nominee for president? That’s why last July I called on Attorney General Lynch to appoint an impartial special counsel to investigate the private Clinton email server.
Read the rest of the story HERE: