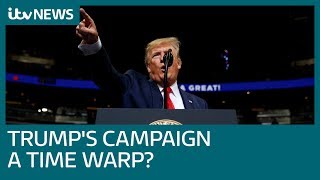 Why Trump's 2020 presidential campaign launch was like a time warp | ITV News It was less a rally to kick-start his re-election campaign, and more a time warp, reports ITV News Washington Correspondent Robert Moore. Within minutes of ...
(Image by YouTube, Channel: ITV News)   Details   DMCA

One reason liberals are reluctant to acknowledge that Trump ran and won as a moderate is that to their eyes, he’s scoring conservative policy wins all the time. One could imagine a Republican reacting to Trump’s platform and saying, “Are you really expecting me to get excited about a president who doesn’t plan to challenge the biggest elements of the welfare state or the left’s single biggest culture war win in a generation?”