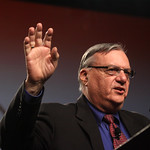 Veteran Arizona lawman Joe Arpaio, a Republican who gained national prominence for his hard-line stance against illegal immigration, conceded defeat on Tuesday in his bid for a seventh term as the sheriff of the state’s most populous county. Unofficial results showed that Arpaio, self-proclaimed as “America’s toughest sheriff,” lost to Democratic challenger and former Phoenix police officer Paul Penzone by about 10 percentage points in the race for Maricopa County sheriff. In a statement, Arpaio, 84, thanked the people for their faith and support over the years and the hard work and dedication of his employees.