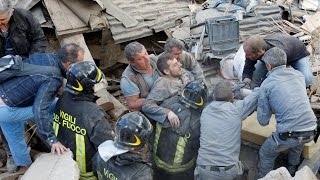 A strong earthquake has struck central Italy, reducing buildings to rubble and leaving at least 21 people dead.
(Image by euronews (in English), Channel: euronews (in English))   Details   DMCA
A strong earthquake in central Italy reduced three towns to rubble as people slept early Wednesday, killing at least 120 people according to Italian Premier Matteo Renzi, and injuring hundreds more as rescue crews raced to dig out survivors with bulldozers and their bare hands. The toll was likely to rise as crews reached homes in more remote hamlets where the scenes were apocalyptic "like Dante’s Inferno," according to one witness. Complicating matters was that the area is a popular vacation spot in summer, with populations swelling, making the number of people in the area at the time difficult to estimate. "The town isn’t here anymore," said Sergio Pirozzi, the mayor of Amatrice. "I believe the toll will rise."
Read the rest of the story HERE: