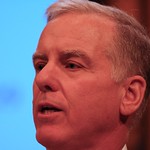 Former Vermont Gov. Howard Dean dropped out of the race to become the next chairman of the Democratic National Committee (DNC) on Friday. Dean, who served as DNC chairman from 2005 to 2009, announced in a pre-recorded video to a conference of state Democratic chairs that he would step aside to allow for a new face to lead the party as it seeks to rebuild. The front-runner is Rep. Keith Ellison (D-Minn.), who has racked up endorsements from Washington lawmakers and national labor unions.