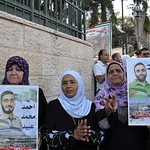 Ramallah – Some 1 500 Palestinian prisoners out of approximately 6 300 Palestinians held by Israel entered the 14th day of an open-ended hunger strike on Sunday, with Israeli prison authorities ramping up punitive measures in an attempt to pressure prisoners to break their strikes – as the health of hunger strikers continued to decline.

Since the launch of the strike, the Israeil Prison Service (IPS) has continuously been transferring hunger strikers into solitary confinement and between different Israeli prisons in an attempt to separate hunger strikers from one another and break the strike.

The media committee said that IPS has continued to ban lawyers from visiting Palestinian prisoners on hunger strike, except at Ofer prison in the central occupied West Bank district of Ramallah and Ashkelon prison in southern Israel.