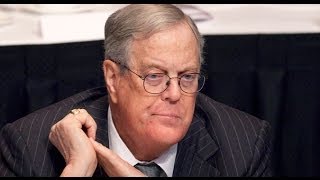 David Koch
(Image by thomhartmann, Channel: thomhartmann)   Details   DMCA
David Koch, one of the biggest backers of the 2012 Republican National Convention, won't support the party's July gathering in Cleveland, where Donald Trump is expected to be named the presidential nominee. Neither David nor his brother Charles will contribute to the convention's host committee this year, said Kenneth Spain, a spokesman for their company, Koch Industries, on Friday. The billionaires are among the country's biggest and most influential political funders, and have made no secret of their distaste for Trump's policies.  Trump was not among them. "They were backing other candidates, total puppets for them," Trump said. "So I fully understand their unhappiness and why they wouldn't want to be involved with me."
Read the rest of the story HERE: