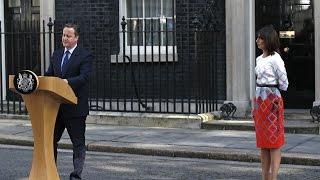 David Cameron resigns after Britain votes to leave EU
(Image by Guardian Wires, Channel: Guardian Wires)   Details   DMCA
David Cameron has resigned, bringing an abrupt end to his six-year premiership, after the British public took the momentous decision to reject his entreaties and turn their back on the European Union. ust a year after he clinched a surprise majority in the general election, a visibly emotional Cameron, standing outside Number 10 on Friday morning alongside his wife, Samantha, said: “The will of the British people is an instruction that must be delivered.” The prime minister campaigned hard in the divisive referendum on Britain’s relationship with the EU, appearing at hundreds of public events up and down the country to argue that Brexit would be an act of “economic self-harm.”
Read the rest of the story HERE: