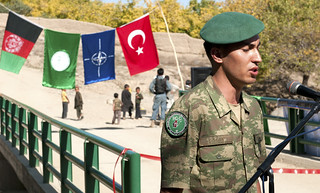 Turkish Army, part of NATO, friend of ISIS
(Image by ResoluteSupportMedia)   Details   DMCA
Turkish army officers and ISIS commanders were caught on tape discussing logistics and other matters.  The audio tapes were put up on Youtube.com, which Turkish authorities immediately banned.  Nevertheless the ongoing story of the Turkish army serving as the ISIS army continues.  What will the NATO supporters of Turkey say about this?