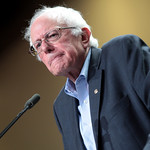 Bernie Sanders
(Image by Gage Skidmore)   Details   DMCA
The Democratic National Committee’s rules and bylaws committee adopted a new rule on Friday that would prevent outsiders like Bernie Sanders from seeking the party’s nomination in the 2020 presidential race. The move seems to be the latest salvo in the ongoing jockeying over the party’s future that emerged following the at times bitter primary battle between Hillary Clinton and Sanders in 2016. The new rule would force candidates in Democratic presidential primaries to state that they are Democrats, accept the party’s nomination if they win the 2020 primary and to “run and serve” as a member.
Read the rest of the story HERE: