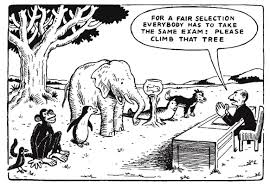 A Puff of Absurdity: Animal Testing: What's wrong with education ...
(Image by apuffofabsurdity.blogspot.com)   Details   DMCA
MENDACITY REPORT: “An advocacy group like Democrats for Education Reform (DFER) sounds as wholesome as Mom and apple pie. “The DFER-PAC injected itself into a complicated school debate when it employed phone banking that connected D.C. residents with their respective school board members, but it did not disclose that it  is a PAC that raises money from corporations, foundations, and influential philanthropists to back political candidates who favor standardized testing and the Common Core standards." it did not tell citizens that the proposal they are pushing, presents the school board with complex decisions in an ongoing policy debate that is central to a virtual culture war over public education reform in America. Here is a safe bet: Not one member of the board of DFER sends their children to a school that is ranked by test scores."
Read the rest of the story HERE:

Other Series: View All 446 Articles in "Insanity AFOOT!"

Other Series: View All 190 Articles in "legislature and governorsL false info- undoing education"