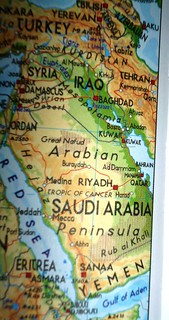 'The borders that exist today — the ones the Islamic State claims to be erasing — created countries out of diverse territories in a secret plan for dividing up the Middle East signed by France and Britain, 100 years ago ( the Sykes-Picot Agreement,  )  was a secret plan  signed by France and Britain, 100 years ago and were modified over the following decades, is now 'a violent, imperfect process' that, today, reflects not any one plan but a series of opportunistic proposals by competing strategists in Paris and London as well as local leaders in the Middle East.  This week  it has become conventional wisdom to argue, as Vice Pres. Joseph R. Biden,  recently did, that the Middle East’s problems stem from “artificial lines, creating artificial states made up of totally distinct ethnic, religious, cultural groups.”