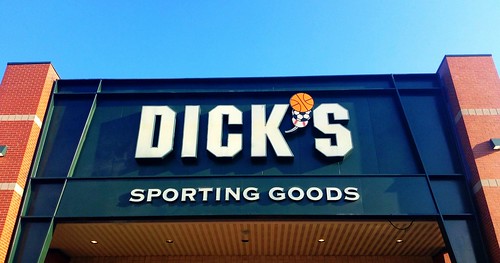 Dick's Sporting Goods,
(Image by JeepersMedia)   Details   DMCA
Corporate America is taking the lead on gun control as Congress slides back into gridlock on the issue. Several major retailers have decided to impose new restrictions on firearm sales, while scores of companies have moved to cut ties with the NRA. Dick’s Sporting Goods announced that it would stop selling assault-style rifles and stop gun sales to those under the age of 21. Walmart, the nation’s largest retailer, announced it would hike the minimum age for firearm purchases to 21 years old and remove items from its website “resembling assault-style rifles, including nonlethal airsoft guns and toys.” L.L. Bean said it will no longer sell guns or ammunition to anyone under 21 years of age, while Kroger announced  that it would raise the minimum age for gun purchases and ammunition.
Read the rest of the story HERE: