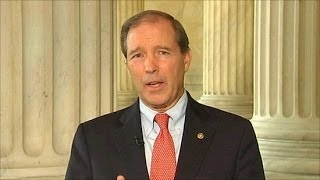 Sen. Tom Udall Proposes Constitutional Amendment Bill .The Senate will vote this year on a constitutional amendment that would allow Congress and the states to regulate the nation's campaign finance laws.
(Image by YouTube, Channel: The Young Turks)   Details   DMCA

National security adviser John Bolton, a far-right proponent of regime change, has been clamoring to go to war with Iran. Their machinations have empowered Trump’s most dangerous instincts as he attempts to draw down U.S. forces from Afghanistan and Syria. In 2002, President Bush got congressional approval for the Iraq War, but Trump and his cadre of hawkish advisers are inching us closer to an illegal war without constitutional authority or backing from the U.N. Security Council.

That’s why we plan to soon reintroduce draft legislation by a bipartisan group of senators that would restrict any funds from being spent on an unconstitutional attack against Iran. Our Prevention of Unconstitutional War with Iran Act would rebuke Iran while affirming congressional war powers and preventing the president from dragging us into another needless conflict.