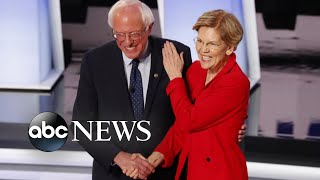 Warren, Sanders appear to break nonaggression pact prior to debate Elizabeth Warren claims that he told her in 2018 a woman couldn't win the presidential election and that his current campaign volunteers are trashing her to ...
(Image by YouTube, Channel: ABC News)   Details   DMCA

Common Defense representing progressive veterans announc ed Monday this co-endorsement. The group cited the senators’ decision to sign its pledge to “end the Forever War,” calling for Congress to re-assert its authority over US foreign policy and take measures to bring the country’s open-ended conflicts to a close in the Middle East. The group said the other major contenders in the Democratic presidential primary (Biden, Buttigieg, Klobuchar) have not signed the pledge or met with the group’s activists to discuss it.

“Both Warren and Sanders have campaigned extensively and unapologetically on bringing our fellow troops home, and have stood up for the majority of veterans despite the skepticism and smears of the hawkish foreign policy establishment and the political media who have too often been uncritical cheerleaders of these failed wars we were sent to fight,”