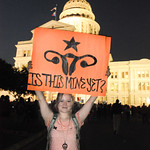 There's "nothing new under the sun." We all lean on precedents set by brave individuals defying social norms.

This is of course true of civil disobedience, as in the case of the football players kneeling rather than standing for the National Anthem.

It's also a huge triumph not just for women but all of society when sexual predators are held responsible for their perversions, the same year as the massive Women's March and under the not-so-watchful eye of Trump & co. Let's never stop until sexism is dead.