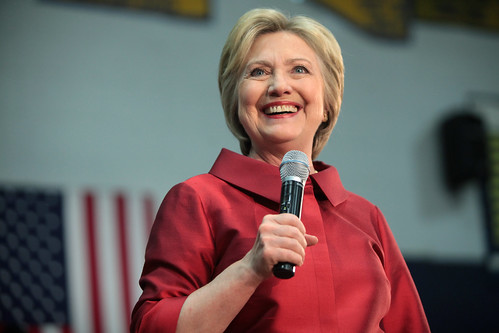 Hillary Clinton
(Image by Gage Skidmore)   Details   DMCA
Hillary Clinton on Thursday won the endorsement of the AFL-CIO, the nation's largest labor federation, in another sign of her consolidation of the Democratic party heading into next month's convention. The AFL-CIO's general board voted to endorse Clinton over Vermont Sen. Bernie Sanders, a move that had been expected after Clinton secured enough support among delegates to become the presumptive Democratic nominee. "Hillary Clinton is a proven leader who shares our values," said AFL-CIO President Richard Trumka in a statement. Clinton won the endorsements of many of the AFL-CIO's largest members in the past year, including the American Federation of State, County and Municipal Employees and the American Federation of Teachers, paving the way for the AFL-CIO to back her campaign.
Read the rest of the story HERE: