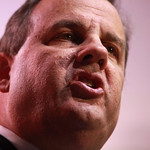 Chris Christie
(Image by Gage Skidmore)   Details   DMCA
Chris Christie said Friday he was taking himself out of the running to be President Trump’s next chief of staff. “It’s an honor to have the president consider me as he looks to choose a new White House chief of staff,” Christie said. “However, I’ve told the president that now is not the right time for me or my family to undertake this serious assignment. As a result I have asked him to no longer keep me in any of his considerations for this post.” A source said first son-in-law Jared Kushner would have put the kibosh on Christie’s candidacy anyway because as a federal prosecutor, Christie had prosecuted Kushner’s father, Charles, who wound up behind bars.
Read the rest of the story HERE: