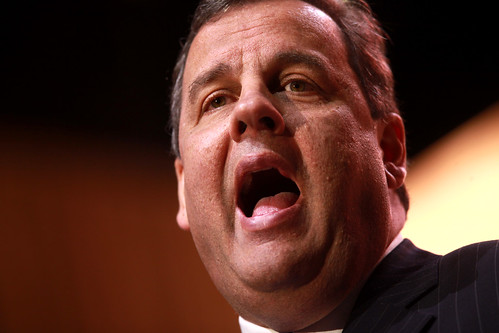 Chris Christie
(Image by Gage Skidmore)   Details   DMCA
Chris Christie believes the American military should “fight back” somewhere overseas in response to a Queens-born American citizen shooting up a gay nightclub in Orlando last Sunday. Though it remains unclear precisely to what extent radical Islam motivated suspected shooter Omar Mateen — a former classmate told the Palm Beach Post he believes Mateen was gay, while his ex-wife told the Washington Post he was emotionally troubled and not particularly religious — Christie believes the shooting was “all about” the fact that “radical Islamic terrorists are out to kill us.” “You gotta get over there and start making them pay where they live,” he said. “It’s an ugly and difficult thing but if we don’t get over there, they’re coming here, and they showed it again this weekend.”
Read the rest of the story HERE: