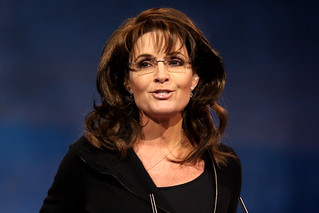 Sarah Palin
(Image by Gage Skidmore)   Details   DMCA
Former Alaska Gov. Sarah Palin on Sunday said that she is ready to serve as Donald Trump’s vice presidential running mate, but she worried about being a “burden” to the presumptive nominee. “I think I’m pretty much as vetted as anybody in the country could be vetted,” Palin told CNN’s Jake Tapper. “I think if somebody wanted to choose me, they already know who I am, what I stand for,” she added. “They wouldn’t be in for any surprises.” But Palin acknowledged that she also came with baggage. “I want to help and not hurt, and I am such a realist that I realize there are a whole lot of people out there who say, ‘Anybody but Palin,'” the former VP nominee admitted. “I wouldn’t want to be a burden on the ticket and I recognize that in many, many eyes, I would be that burden.”
Read the rest of the story HERE: