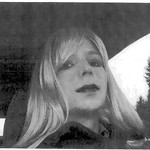 Chelsea Manning
(Image by mathew.lippincott)   Details   DMCA
Chelsea Manning, who confessed to disclosing archives of secret diplomatic and military documents to WikiLeaks in 2010 and has been incarcerated longer than any other convicted leaker in American history, has formally petitioned President Obama to reduce the remainder of her 35-year sentence to the more than six years she has already served. In a statement accompanying her petition, a copy of which her lawyer provided to The New York Times, Ms. Manning again said she took “full and complete responsibility” for her actions, which she called “wrong.” She also described her difficult life, including the turmoil she faced at the time of her leaks as she came to grips with gender dysphoria while deployed to Iraq, her treatment in prison, and her multiple suicide attempts.
Read the rest of the story HERE: