The mummified remains of a child who lived about 6,000 years ago and fragments of the Dead Sea Scrolls have been discovered at a legendary site in Israel known as the “Cave of Horror.”

Archaeologists also found a 10,000-year-old woven basket ― believed to be the oldest of its kind ― as well as a trove of ancient coins and clothing in the cave, which can only be reached by rappelling down a sheer cliff.

The Israel Antiquities Authority called the discoveries in the Judaean Desert “astounding” when it announced the find this week.

“This is a historic discovery, on an international level at this time,” Raz Frohlich, the director of the Ministry of Sports and Culture, said in a news release. 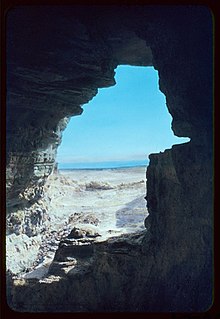 View of the Dead Sea from a Cave at Qumran.
(Image by Wikipedia (commons.wikimedia.org), Author: Eric Matson - Matson Photo Service)   Details   Source   DMCA
Read the rest of the story HERE: