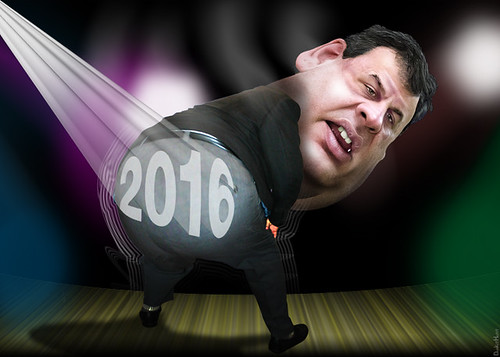 LOL!  if it were not so close to reality --- "Andy Borowitz jokes that Donald Trump, looking to raise money for his Presidential campaign, is auctioning off Chris Christie on eBay. Christie, who is described on the site as being in lightly used but good condition,   and  can perform a full range of escort duties and has 'extensive experience in chauffeuring, door-opening, umbrella-holding, reflexive clapping, and soothing end-of-the-day foot massages.' Speaking at Trump Tower, in Manhattan, the presumptive Republican nominee said that he was still considering financing his general-election campaign himself, but he added, 'First I wanted to see what I could get for Chris.' When asked about his latest service to the Trump campaign, Christie told a reporter, 'Get away from me. Just get away or I’ll hurt you.' ”