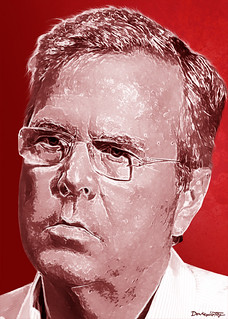 Jeb Bush - Portrait
(Image by DonkeyHotey)   Details   DMCA
Jeb Bush has firmly established himself as the Republican to vote for if you wish his brother were still president. Best of luck with that. In what was billed as a major foreign policy speech Tuesday, Bush proposed inching back into Iraq, wading into the Syrian civil war and engaging in much the same kind of geopolitical engineering and nation-building that George W. Bush attempted. So much for the whole “I am my own man” routine. Bush blames President Obama and likely Democratic nominee Hillary Clinton for basically all that is wrong with the world. Voters may have short memories, but I think they’ll remember it was Bush’s brother who shattered the Iraqi state and created the vacuum that the Islamic State came to fill.
Read the rest of the story HERE: