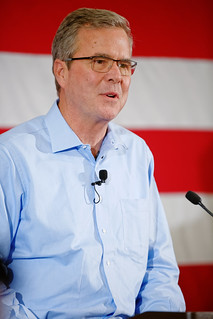 Jeb Bush
(Image by Michael Vadon)   Details   DMCA
At its darkest hour, the Bush campaign is wondering if the family name it thought would ruin its candidate's campaign may actually save it. In a recent interview with Fox News, Bush hinted that brother George W. Bush may join him on the trail to save his struggling campaign. “It is something to consider because he is very popular. And I also know I need to go earn this," Bush said. “My brother has been a strong supporter and I love him dearly. He’ll continue to play a constructive role.” There's reason to take a gamble with George W. Bush. It may shore up Jeb's standing with conservatives, as well as remind conservative voters of a largely well-liked and respected political family.
Read the rest of the story HERE: