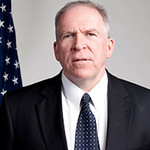 CIA Director John Brennan said Wednesday that the next president could remove the restrictions President Obama has put on the use of drones overseas — and that the CIA might comply with an order to commit torture. “If a president were to order, order the agency to carry out waterboarding or something else, it’ll be up to the director of CIA and others within CIA to decide whether or not that, that direction and order is something that they can carry out in good conscience,” he said. Donald Trump has previously advocated for targeting the innocent family members of terrorist suspects, saying, “When you get these terrorists, you have to take out their families. They care about their lives, don’t kid yourself.” Trump has also said he would bring back “a hell of a lot worse than waterboarding.”