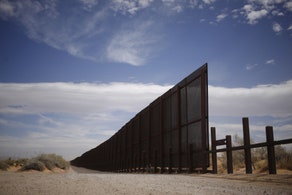 Trump's Border Wall Won't Cover the Whole Border
(Image by teenvogue.com)   Details   DMCA
U.S. Customs and Border Protection ordered medical checks on every child in its custody Tuesday after an 8-year-old boy from Guatemala died, marking the second death of an immigrant child in the agency’s care this month. The death came during an ongoing dispute over border security and with a partial government shutdown underway over President Donald Trump’s request for border wall funding. Margaret Huang, executive director of Amnesty International USA, said the Trump administration’s “policies of cruelty toward migrants and asylum-seekers at the border must cease immediately before any more children are harmed.”
Read the rest of the story HERE: