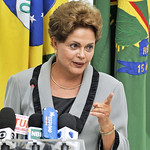 Brazil's suspended president Dilma Rousseff will confront her accusers Monday in a dramatic finale to a Senate impeachment trial likely to end 13 years of leftist rule in Latin America's biggest country. Rousseff's testimony will come just hours before a final vote to decide her fate, with everything pointing to her being convicted. Rousseff, 68, is accused of having taken illegal state loans to patch budget holes. Momentum to push her out is also fueled by deep anger at Brazil's historic recession, political paralysis and a vast corruption scandal centered on state oil giant Petrobras.