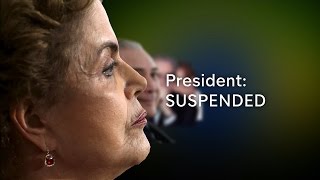 Brazil President Dilma Rousseff
(Image by Channel 4 News, Channel: Channel 4 News)   Details   DMCA
Brazil’s Prosecutor General has requested the arrest of Senate Chief Calheiros and other ruling party leaders over an alleged corruption cover-up. Brazil's chief prosecutor asked the Supreme Court to authorize the arrest of the presidents of the Senate and of the ruling Brazilian Democratic Movement Party, or PMDB, for allegedly trying to obstruct police investigations, newspaper O Globo said on Tuesday. The trial is expected to conclude in mid-August as Brazil is hosting the Olympic Games in Rio de Janeiro. Under Brazilian law, the Supreme Court must approve any judicial action taken against members of congress.
Read the rest of the story HERE: