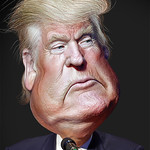 Donald Trump - Caricature
(Image by DonkeyHotey)   Details   DMCA
In what they believe is a legal masterstroke, lawyers for Donald Trump are now claiming that he cannot be impeached because he was never actually elected. In a lengthy memo sent to the special counsel, Robert Mueller, the lawyers pushed back vehemently against any allegation that Trump was legally elected President. “Because Russian interference made the election of Donald J. Trump wholly illegitimate, any attempt to remove him from an office that he does not legally hold is clearly impossible,” the memo asserted.
Read the rest of the story HERE: